Tawny Allison is an Anishanaabe Kwe from Bkejwanong Walpole Island First Nation of Ontario. She is currently an Articling Student at Aboriginal Legal Services Toronto while also pursuing her Masters of Law (LLM) at the University of Ottawa. She is an experienced academic and Indigenous advocate in the legal community, utilizing heart knowledge to mobilize Indigenous voices and experiences. As a recent graduate of the University of Ottawa Faculty of Law, she is pursuing a legal career that advances reconciliation and advocates for all Indigenous people.

Her specific area of legal interest lies in Indigenous Child Protection and the relationship of that intersection to all areas of law.

Tawny completed her undergraduate degree at the University of Guelph where she was the recipient of the Kishaadigeh Award (She Who Guards the Lodge). The Kishaadigeh Award is the highest honour for an Indigenous student across all campuses and recognizes the significant contributions of the scholar to the Indigenous community and their peers through volunteerism, engagement, academic achievement, and leadership. She completed her JD degree at the University of Ottawa Faculty of Law and made significant contributions to the law school. In her first year, she became the 1L representative for the Indigenous Law Students Association (ILSA), which led to her becoming the Vice President and then President in 2L. She was Co-President of ILSA when they advocated for and were successful at becoming a recognized stand-alone student government. Now renamed the Indigenous Law Students Governance (ILSG), they have equal authority within the law school as the third official student government, alongside common law, and civil law. Tawny was the University of Ottawa’s Faculty of Law valedictorian at her convocation as well as receiving numerous advocate and volunteer-based scholarship awards during her degree.

Tawny is a distinguished leader in the Indigenous community and legal field. She uses her positioning as an Indigenous woman to advocate for all marginalized groups through various channels grounded in the continued mobilization of Indigenous traditional knowledge. What sets her apart is her empathic way of navigating all the work that she does in her personal and professional life. Everything Tawny does is trauma-informed and grounded in a deep understanding of the seven grandfather teachings as they pertain to the human condition.

Tawny has two chihuahua sons, Bean (6) and Bug (2). Her spare time is spent walking them in nature and loving them unconditionally. She enjoys earthing, connecting to nature and deepening her spiritual wellness. 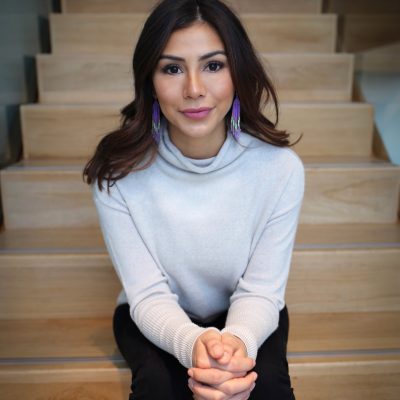